Best magicians near you

Top magicians near you

Browse the best magicians and compare ratings and reviews.

The Magic Of Greg Gelb

Cape Town WC
Greg Gelb is a Deception Artist, born and bred in Cape Town. He is a world-class, international entertainer who specialises in a unique form of sleight-of-hand magic. He brings with...

Kenilworth Cape Town WC
Bazinga Parties is a premium kids party entertainment company based in the Western Cape that creates memorable experiences for children at parties and events. We are experts at: Balloon Art,...

Sandton GP
A hilarious Children's Magic Show for 4 - 6 year olds performed by Sparkles the Clown, featuring Pipsqueak the mischievous Parrot and Toast the Ghost. Your child becomes the star...

Somerset West Cape Town WC
Regardt Laubscher has been performing professional magic for the past 17 years. He is perfect for any event, any place and any time - for any age from 3-103. A...


Hire the best magician for your event

The appeal of magicians

Who amongst us is not fascinated by the art of the magician? Who has not been astonished and awed by their skills when performing magic tricks which leave us truly baffled and unbelieving? Professional magicians are invited to entertain at events such as birthday parties - for all ages - which clearly shows their popularity. Why? Simply, because we love to believe that magic really does exist, and the entertainment value of a magic show never fails.

What can a magician help with?

Bring magic to your event

A magician is a multi-talented performer whose entertainment skills and tricks have the ability to confuse and question our factual beliefs and reasoning of the known world. A magician is also known as an illusionist, as he creates scenarios which appear to be factual but are really very cleverly designed tricks. Who has not been astounded by acts such as cutting someone in half on stage and then putting them back together with no apparent ill-effects, making someone disappear and then re-appear in an entirely different location almost instantaneously, on-stage levitation, “mind-reading” (often using the audience as his subjects) and, of course, the famous card tricks and relocation of various objects.

We all know that the magician is performing exceptionally skilled and sometimes personally dangerous tricks, but convince ourselves that magic is involved when we can find no rational explanation for the illusion. We surely all remember the incredible illusionist David Copperfield, who made the Statue of Liberty “disappear” during one of his most famous tricks. No wonder he has been named the Magician of the Century!

A good magician wears many different hats, as he is an actor, illusionist, storyteller and often a humourist, able to build up suspense within his audience to draw them into the magical scenarios he creates on stage. Nonetheless, a magician works mainly through trickery achieved by sleight of hand, speed, skill, experience, suggestion, imagination, misdirection, manipulation and showmanship.

His act may include various stage props built specially to accomplish particular illusions, and many stage magicians have one or two trained assistants on stage with them to perform certain parts of their show. In previous years, magicians were mysterious and rather haughty characters whose acts were carried out with a serious demeanour and in near silence, which added to the whole belief of being part of an elite and secretive clan. Nowadays, magicians add a lot of humour and sometimes clever foolery to their acts to keep the audience, and children in particular, fully engaged in the act. After all, involvement is the intention for such magicians, and both children and adults of all ages love an entertainer who makes them laugh whilst being tricked into believing that real magic is happening right in front of them.

Check their ratings and customer feedback

Magicians are definitely making a comeback as professional entertainers, and a steadily growing number of these special people are beginning to advertise their services. Before committing to any particular magician, be sure to ask around amongst your friends and acquaintances for recommendations. While word of mouth is usually a favoured method for finding entertainers, magicians who are very popular and well-known have their own websites and it will be easy to check their client lists and online reviews, which are guaranteed to give honest feedback. Uptasker is a valuable and informative resource when looking for the styles and previous shows of various magicians, as well as online reviews.

Make sure your magician is the right fit for your audience

Speak to your intended performer and ensure that his act is suitable for the function and audience you have in mind. Ask about his clients and, if possible, contact them directly to discuss the performance and reaction of the audience to the act. Always make your expectations clear and agree fees and any requirements the magician may have for his act well before the function, so that you are not caught unawares at the last minute. It might also be wise to arrange some form of backup entertainer with the magician, if possible, should he become ill and unable to appear on the day of the party, especially if children are involved. 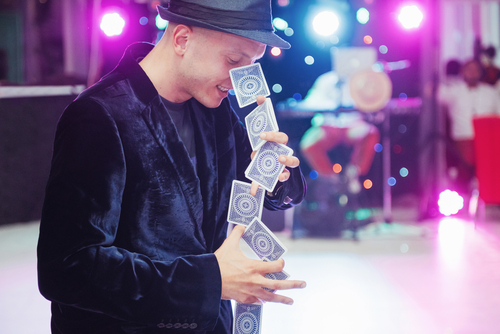 When choosing a magician for your next function, think of the audience you are planning to entertain. If it is a children’s party, a magician who brings fun, laughter and participation into the act would be an ideal choice. For more discerning adult functions, it would perhaps be better to choose an act which challenges the mind of the audience. For a function or party full of entertainment, fun and participation with the promise of pure magic, you could not do much better than hiring a magician. For more tips, see our magician articles.


More magicians near you

Cape Town WC
Highly experienced and respected Meetings & Events Magician and Mentalist with 30 years experience. SA TV Celebrity with over 200+ TV shows and appearances in over 165 countries. Author of...

Johannesburg GP
Since a child David has always had the mind of a magician. As a seasoned entertainer he now dazzles his audiences every time. He effortlessly creates a sense of wonder...

Cape Town City Centre Cape Town WC
PLANNING AN EVENT? Then you have just found the solution to ensure you have the most exciting, memorable and mind-blowing entertainment with the magic, comedy & mentalism of Alexander May!...

Cape Town WC
Corporate presentations, outdoor venues, music festivals, casinos, malls, fairs and/or exhibitions, we can offer you an Escape Act guaranteed to draw huge crowds and help make your event something they...

Cape Town WC
International Award-Winning Magician and Entertainer – Matt Gore has wowed audiences all over the world for more than ten years. After winning the title of FISM Africa Magic Champion in...

Cape Town WC
Stuart Lightbody is a multi-award winning sleight of hand artist and psychological illusionist. Many years ago Stuart was taught that our lives are not measure by the number of breaths...

Farrarmere Benoni GP
Trevor Duffy is a highly motivated international Magician who has been involved with the magical entertainment arts for 25 years. He is based in Johannesburg, but travels as required. A...

OPEN
Posted by Jenny
When: Next few weeks
Job Description: A brief magic show for a school staff.
Jun 1, 2021

OPEN
Posted by Theuns
When: See job details
Job Description: We need an entertainer for a themed evening. We max at about 60 people. Must be interactive with the guest ( covid rules followed). It will be for a mostly older group 50+. Date will still be establish.
May 26, 2021

OPEN
Posted by Elsabe B.
When: See job details
Job Description: We are looking for an affordable MC/magician for our wedding at the Cape Milner Hotel in Tamboerskloof on 17 July 2021. It will be a small, intimate affair with +/- 40 guests. We would require the MC/magician to entertain the guests while we're busy with our photos - it has to be impromptu with a roaming mike. The MC/magician has...
May 8, 2021

IN PROGRESS
Posted by Isabelle W.
When: I'm flexible
Job Description: I am looking for a magician to entertain a group of about 20 kids for my grandson's 7th birthday on the 1st February 2020 at 3pm., for about 1 hour.
Jan 21, 2020